In the final instalment of a five-part series, SA Rugby magazine’s writers pick their best Springbok XV of the past 25 years.

OUR SPRINGBOK XV: The back three

OUR SPRINGBOK XV: The midfield

OUR SPRINGBOK XV: The halfbacks

JON CARDINELLI: Let’s get the easiest call out of the way first. Victor Matfield was the world’s best lineout exponent during his pomp and one of the finest athletes to have played the game for South Africa.

The inclusion of Matfield in the starting lineup improved the Boks’ chances of bossing the set pieces and controlling a match. Likewise the inclusion of Bakkies Botha at No 4 with regard to the Boks winning the collisions and pummeling their opponents into submission.

I’m probably going to get some stick for my front-row selections . So be it. In the end I had to make room for one of the great Test captains as well as one of the most complete Test hookers.

John Smit was a key cog in the Bok set-piece machine between 2004 and 2007. In 2009, he moved from hooker to tighthead prop to allow the Boks to accommodate the multitalented Bismarck du Plessis.

The move ensured that South Africa started with their captain – and Smit was one of the finest of this or any other era – and one of their best players. Du Plessis was a hulk of a man, and as aggressive as any blindside flank. And yet, he also had the ability to play like an openside and win key turnovers for his team.

Os du Randt won two World Cups and is remembered as one of the true legends of South African rugby. It was a tough call, but in the end I favoured Beast Mtawarira for the loosehead position.

The retreaded loose forward offered the Boks plenty as a ball-carrier, and his 112-Test career was effectively bookended by two game-changing scrummaging performances. While he made his debut in 2008, it was in the first Test of the 2009 series against the British & Irish Lions – where he destroyed Phil Vickery at the scrum – that Mtawarira announced himself as a world-class player. More than a decade later, in what was his final Test, Mtawarira outscrummed Dan Cole as the Bok pack set the platform for victory in the Word Cup final in Yokohama.

CRAIG LEWIS: I see some of my colleagues have opted for John Smit at tighthead prop, and all I can think is that we’re going to need to have some strong words when we all get back to the office.

As much as Smit was a legend of the game, personally I can’t find a place for him in my team (forgive me skipper). But a front row of Beast Mtawarira, Bismarck du Plessis and Jannie du Plessis just had everything going for it when they were in their prime.

Of course, the Du Plessis brothers came with their own reputation, but they also fondly refer to Mtawarira as their ‘brother from another mother’, and the bond and connection they had in the front row was unique and brutally effective.

In the second row, my picks are obviously, and without needing explanation: Bakkies Botha and Victor Matfield. If we’re talking about close-knit bonds, these two would complete a unified tight five like no other.

In this tight five selection, the total number of Test caps would be just shy of 500. That’s some group of players.

OUR SPRINGBOK XV: The halfbacks

WADE PRETORIUS: I once joked that there was a time when the Springbok pack could’ve been made almost entirely out of locks – Pieter Steph Du Toit played there, Eben Etzebeth is now one of the best in the world while Franco Mostert and Lood de Jager are certainly on the track to very, very fine careers. We haven’t even gotten to the contributions of players like Mark Andrews and even someone like Danie Rossouw, who was a casualty of his versatility.

But in choosing the all-time, none can lay claim to the achievements and performances of Victor Matfield and Bakkies Botha. And then factor in their partnership. Read above and below and you’ll pick up only a fraction of their worth to the Bok cause.

The front row is more contentious – John Smit or Bismarck? Beast or Os?

I’m not bending rules here (*rolls eyes at most colleagues) and picking players out of position. And Bismarck du Plessis gets my vote. He was a supreme athlete and should’ve played/started many more games in the green and gold.

Only in this cruel selection could someone ask me to choose between Beast and Os. I was the last to fill in my selections because it took me 30 minutes to decide. Ultimately, I’m going to bow to more recent memories and choose Beast Mtawarira. For length of service, for consistent quality throughout his decorated career and for a number of match-winning performances in the most heated battles.

MARIETTE ADAMS: When they are considered in some parts of the world as the greatest lock pairing of all time, it’s not really all that difficult to classify Victor Matfield and Bakkies Botha, without reasonable doubt, as the best Springboks second rowers ever.

While Matfield was subtle and skillful in his lineout mastery (see 2007 RWC final against England), Botha was the abrasive, aggressive enforcer. Botha was the fire to Matfield’s ice and the combination instilled fear in the Boks’ opponents.

Together they formed one of rugby’s most potent partnerships, but let’s not forget that individually, they would still give any other lock in world rugby a run for their money. They were that good.

Selecting a well-balanced front row is a bit tricky, because South Africa has produced so many world class props and hookers. Ultimately, I decided on Jannie du Plessis, Bismarck du Plessis and Os du Randt.

With 111 Test caps, World Cup and Rugby Championship winners medals, John Smit is the decorated hooker and captain in Springbok history. But Du Plessis was an absolute freak of nature in a Springboks jersey. He had to patiently bide his time until Smit retired in 2011, once he stepped into that first-choice hooker role, Du Plessis was the best hooker in the world.

I’d even go as far as to say he was unplayable at times. On top of being ridiculously good at traditional, core responsibilities of a hooker, his strength over the ball at the breakdown, meant Du Plessis played as a fourth loose forward.

During his national career, Du Plessis was one of the best scrum anchors in the game and with 70 Test appearances to his name, he still holds the record for the the most capped Bok tighthead in history.

Of those three World Cup appearances, Du Randt walked away as a gold medal winner twice, a feat that speaks to his absolute star power, dominance and ability to scrum all-comers into the ground.

DYLAN JACK: As my colleagues have already pointed out, the easiest call to make here is in the second row, taken by the ‘Blood Brothers’, Victor Matfield and Bakkies Botha.

Even when coming out of retirement at 37-years-old, Matfield remained one of the greatest exponents at the lineout the game has ever seen. As one former player told me, there were times that the Springboks had an attack planned even when they did not have the put-in at the lineout, so confident were they that Matfield would poach the throw.

Meanwhile, Botha was someone who you would hate to play against. The amount of work that he put in off the ball made him a coach’s dream as his physicality was a key part of the Springbok gameplan. Having already won a World Cup and with 80 caps to his name at 28-years-old, Eben Etzebeth may go one to eclipse the former Vodacom Bulls player in the future.

I am going to cheat with my front row selections and name John Smit at tighthead prop. Smit’s leadership and set-piece ability is far too vital to leave him out of a professional-era Bok XV. If I had to select a specialist tighthead, I would probably go for CJ van der Linde, who would narrowly edge out Jannie du Plessis.

Bismarck du Plessis takes up his place at hooker, where he was simply sensational for the Springboks. Du Plessis brought the aggression of a blindside flank and yet had the poaching ability of a top-class fetcher.

Beast Mtawarira gets in at loosehead prop ahead of Os du Randt, who will always have the utmost respect for what he achieved with the Springboks. From announcing himself by dominating Phil Vickery to finishing his Test career by sending the English scrum backwards at a rate of knots, Mtawarira was easily one of the best props to wear a Springboks jersey.

WATCH: Senatla embracing the next challenge

Let attacking prowess decide the outcome of a crunch tie rather than... END_OF_DOCUMENT_TOKEN_TO_BE_REPLACED

With Cobus Reinach ruled out of the upcoming series against Wales, DYLAN JACK... END_OF_DOCUMENT_TOKEN_TO_BE_REPLACED

The selflessness of Ruan Pienaar and Frans Steyn at the Cheetahs should... END_OF_DOCUMENT_TOKEN_TO_BE_REPLACED

Rassie Erasmus has made the most calculated of public job applications to... END_OF_DOCUMENT_TOKEN_TO_BE_REPLACED

Cheslin Kolbe’s big-money move to Toulon should be welcomed as a massive... END_OF_DOCUMENT_TOKEN_TO_BE_REPLACED

The opportunity to play against the All Blacks is a career highlight... END_OF_DOCUMENT_TOKEN_TO_BE_REPLACED

SARugbymag.co.za identifies six of the best and worst foreign players to play... END_OF_DOCUMENT_TOKEN_TO_BE_REPLACED

As highlighted by the Argentina controversy, ‘cancel culture’ needs a spoonful of... END_OF_DOCUMENT_TOKEN_TO_BE_REPLACED

The problems at Western Province Rugby are layered, and everyone involved needs... END_OF_DOCUMENT_TOKEN_TO_BE_REPLACED

After a massive exodus of players the Vodacom Bulls will be eager... END_OF_DOCUMENT_TOKEN_TO_BE_REPLACED

For the Boks to emerge as World Cup winners, they need to... END_OF_DOCUMENT_TOKEN_TO_BE_REPLACED
VIEW MORE 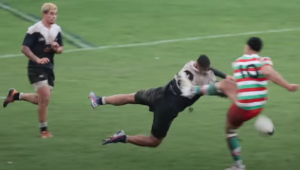