Rassie Erasmus says the women’s game in South Africa is a big priority as the Springbok Women and Women’s Sevens teams prepare for a season that includes two World Cup tournaments.

On Tuesday, the SA Rugby director of rugby addressed a virtual media conference from Cape Town alongside women’s high-performance manager Lynne Cantwell, who will be instrumental in driving the women’s game into the hearts and homes of South Africans.

He confirmed the elevation of women’s rugby and SA Rugby’s desire to see rugby being played by women from grassroots to international level, where he hopes the national teams will be among the top-tier nations soon.

Erasmus made it clear that the deliberate actions from his department will not only benefit the national women’s teams, but also coaches and younger players hoping to get into the game of rugby. A strong base of younger players entering the game will be part of the strategy to boost the profile and acceptance of women playing the sport.

“We will find a South African way to grow the game as we are a unique country and to copycat systems from elsewhere is not going to work,” said Erasmus.

“We need rugby to be taught and endorsed from a women’s perspective; we have seen in the past that you cannot just copy a men’s programme and expect it to work. We tried that in the past and learned from our mistakes.

“We will have a competitive system, sooner rather than later, but we are also realistic and know it will not be possible to perform any miracles,” he added, pleading for patience with the Springbok Women and Springbok Women’s Sevens teams, who are ranked 13th and 12th in the world, respectively.

“I want to use Japan as an example, who lost by almost 150 points to New Zealand in the 1995 Rugby World Cup, but in 2019 they reached the quarter-finals of the World Cup, where they gave the Springboks a very tough game. That transformation took them more than 20 years, but look where are they now.

“For us, elevating our women’s programme will not create miracles, as we can’t immediately put resources towards them without impacting on the Springbok Sevens and Junior Springboks, for example.

“We have reached out to some sponsors in this regard and there have been promising talks, but at the same time we are encouraging potential sponsors to come forward and become part of that will be an incredible journey,” Erasmus added.

Ultimately, opportunities and pathways need to be created for young girls wanting to play the game, which is where Cantwell’s contribution will be crucial, as the former Ireland international – in fifteens and sevens – brings with her 22 years’ worth of experience in the game.

For Cantwell, the worldwide momentum towards women’s sport should find rugby an easy target: “The first Test match for women was played in 1982, whereas South Africa played their first Test in 2004, so we are way behind the world curve, but that does not mean the gap cannot be bridged.

“In the background, though, we need to ensure that every rugby-playing province in the country creates a pathway for younger players and that the barriers to entry into the game for girls are minimised.

“We are also investing – thanks to a sponsorship – in the development and training of coaches in order to make sure we start with solid fundamentals to the game.”

“Our Springbok Women had a very successful tour to France, Wales and England in November last year, where the squad were exposed to the rigours of test rugby and also experienced the intensity of rugby at that level,” she said.

“We are planning six matches for them – depending on the Covid situation – in the lead-up to the Rugby World Cup in New Zealand in October.”

The Springbok Women’s Sevens team will contest the Rugby Africa Sevens in Tunisia at the end of April and, if they are successful, will qualify for the Commonwealth Games in Birmingham in July.

They have also set their sights on an invitation to play in the World Rugby Sevens Series later this year, and hopefully to then qualify as a core team or the circuit.

The World Cup Sevens in Cape Town in September is another milestone for the squad as it will lead to more exposure for the players.

“We want girls and women to know that they can win medals, play at World Cups and represent their country through this wonderful game of rugby with all the wonderful exposure that could bring. The support from SA Rugby and Rassie are very well received and appreciated,” Cantwell added.

Jake White is a World Cup winner, but he reacted to defeat... END_OF_DOCUMENT_TOKEN_TO_BE_REPLACED

The 2022 Currie Cup final being decided by the country’s smaller unions... END_OF_DOCUMENT_TOKEN_TO_BE_REPLACED

Damian Willemse and Frans Steyn won't play in the first Test between... END_OF_DOCUMENT_TOKEN_TO_BE_REPLACED

Jesse Kriel's experience and versatility make him a big asset for the... END_OF_DOCUMENT_TOKEN_TO_BE_REPLACED

Rassie Erasmus has made the most calculated of public job applications to... END_OF_DOCUMENT_TOKEN_TO_BE_REPLACED

Cheslin Kolbe’s big-money move to Toulon should be welcomed as a massive... END_OF_DOCUMENT_TOKEN_TO_BE_REPLACED

The opportunity to play against the All Blacks is a career highlight... END_OF_DOCUMENT_TOKEN_TO_BE_REPLACED

SARugbymag.co.za identifies six of the best and worst foreign players to play... END_OF_DOCUMENT_TOKEN_TO_BE_REPLACED

As highlighted by the Argentina controversy, ‘cancel culture’ needs a spoonful of... END_OF_DOCUMENT_TOKEN_TO_BE_REPLACED

The problems at Western Province Rugby are layered, and everyone involved needs... END_OF_DOCUMENT_TOKEN_TO_BE_REPLACED

After a massive exodus of players the Vodacom Bulls will be eager... END_OF_DOCUMENT_TOKEN_TO_BE_REPLACED

For the Boks to emerge as World Cup winners, they need to... END_OF_DOCUMENT_TOKEN_TO_BE_REPLACED
VIEW MORE 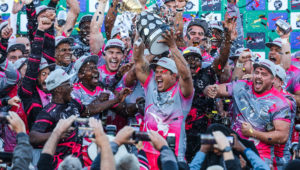